I should have posted on here that our show was airing on June 12th, but forgot.  Sorry.  So for those that have not seen it and want to, our episode is airing again on July 27th at 11pm.

Here is the link to showtimes: http://www.hgtv.com/house-hunters-international/a-caribbean-quandary/index.html 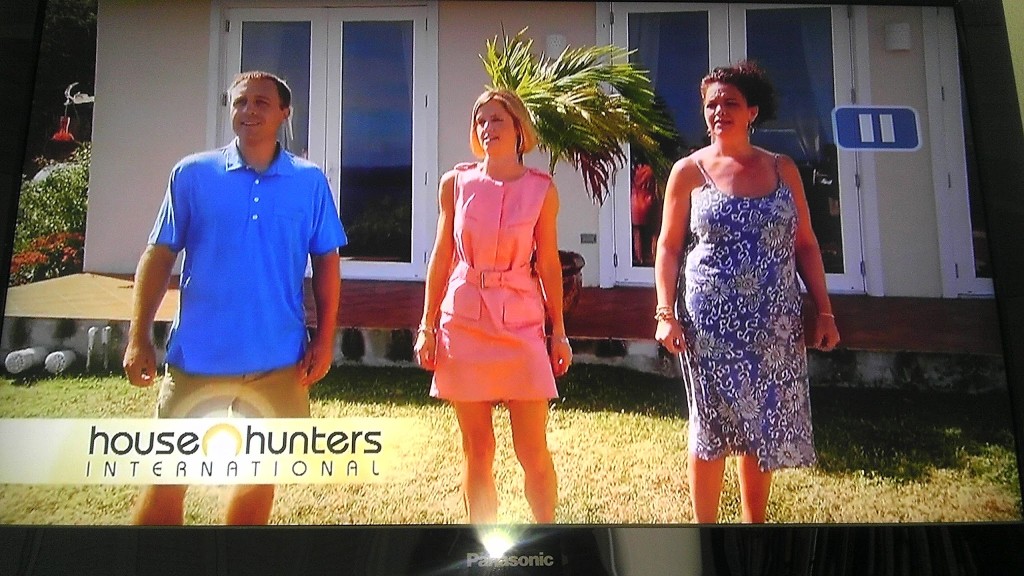 In the middle of July, H and I decided to make our “pre-move visit” to St. Croix. This was going to be a whirlwind trip since we would fly in on Thursday and fly home on Monday. We had made arrangements to meet with Alexandra Bentley, a realtor I met on the relocation forum, on Friday. She was going to show us different vacant lots on the north and east sides of St. Croix, mostly waterfront. Vacant lots were our main agenda item as our thoughts are that we cannot afford a pre-existing waterfront home.

We chose to stay at Carambola Beach Resort for this trip as we got another great deal with skyauction.com. Carambola is located on the north side of the island and is on the edge of the “rain forest.”

We rented a car for this trip since we wanted to really get out and see all different sections of the island. We rented from Thrifty and were disappointed to find out that their cars were not located at the airport like some of the other rental agencies. When H called from the airport to see where they were located, they said that they had a car on the way for us. It turns out the “car” was also picking up two other couples and a lot of luggage in a minivan. That was a tight ride all the way to Christiansted.

After getting our neon yellow Jeep, we started the drive to the resort which probably took about thirty minutes driving fairly slow. The roads were winding with a few steep hills. The view was incredible though as most of the road follows the north shore, hence the name, North Shore Road. By this trip, H had gotten the hang of driving on the left, and I didn’t have to yell “keep left” like on our previous trip.

Carambola was a beautiful property. Unfortunately, we did not receive an upgrade like we had received at the Buccaneer. Our room was on the second floor with only a sliver of a view of the water. The room was enormous, however, and one really nice feature was the screened in porch. I think I read my book out on the porch every morning. The room also had two refrigerators which was handy with all the water we were drinking down there. The room did feel a little dated, and there seemed to be a lack of light with the very dark wood on the walls and ceilings.

One drawback (and benefit) to the property is that it is in the middle of nowhere. The North Shore Road literally dead-ends into the resort. In addition, there was no cell phone service. H had dragged his laptop computer all the way to St. Croix based on Carambola’s website that mentioned meeting facilities and wireless internet connectivity. (I had emailed them to inquire specifically about Internet service, but I never received a reply. ) When we checked in, the front desk person told H that they had wireless service outside by the bar. H tried to connect everyday but was unable to do so and not a single person that worked at the resort knew what the problem was. They simply said, “It is probably the cloud cover” as it was apparently some sort of satellite connection. He was forced to use the painfully slow dial-up computer connection in the lobby.

Friday was a really long day. Alexandra picked us up in the morning and off we went. We started out looking at properties on the north shore. It turns out that we really liked this area. It was very lush and hilly with beautiful beaches. We had dinner the previous night at the Full Moon Beach Bar in Cane Bay, and it seemed like the people in the area were really laid back.

Alexandra had convinced us that we did not have to buy waterfront to find a great property. I’m glad that we listened to her since we saw some really great properties that were elevated with beautiful views.

One funny thing about real estate in St. Croix is that there are few For Sale signs on properties that are for sale and of course directions to the unmarked properties included very specific landmarks like “the lot south of the house formerly known as ‘Garvey’”. I mean, everyone knows where that is, right? Even with Alexandra’s knowledge of the island, we were often unsure if we were looking at the vacant lot that was actually for sale or something entirely different.

We proceeded driving east (but still on the north shore) and ended up in a gated subdivision called Judith’s Fancy. There were several vacant lots for sale in this area and we were very encouraged by what we saw. The lots were approximately one acre and directly on the beach. Better still, it was a sandy beach. With the position of the property, we would also receive strong ocean breezes (and strong salt spray, we later learned.) H remarked that I would be able to run on the well-paved roads without him having to constantly worry about me, and I thought that these same roads would be a safe place to walk the dogs as well. The beachfront homes were really nice and we thought that any house that we built on these lots would be worth more than our initial investment in no time. At least that is what our optimistic instincts tell us.

At this point, Judith’s Fancy seemed perfect. One problem: the lots were a lot more than we planned to spend. When we were down on St. Croix in February, it seemed like there were even some waterfront lots in our price range. Now, unless we wanted to buy a parking lot in the middle of town, most of the lots were almost twice what we spent on our home in Texas. Still, we would not be discouraged. This is our dream, and we will find a way to make it work.

We continued east of Christiansted. We drove through Shoys which is where the Buccaneer is located – very beautiful homes here. As a result, most of the lots were smaller and not waterfront, but still more expensive.

We drove further east. The island’s landscape had been changing slightly as we drove east. Now, it was almost like a desert. It was still beautiful but a stark contrast to the west side. The vegetation was more like brush and everything just looked drier. Not really what you think of when you think “Island Paradise”. It was also a bit warmer on this side of the island.

We looked at several lots in Solitude and some in Grapetree Bay. We also found one close to the yacht club that we liked. On this end of the island, most of the lots that we looked at were not waterfront but were slightly elevated with great views. These have become options for us.

The opinions vary widely as to whether or not you should live on the water. The thought of walking out our back door and directly onto the beach is so appealing to us. However, we have been told that when you live on the water, the salt spray absolutely ruins all electrical appliances in no time at all. A lady told us that when she first moved to St. Croix, she lived on the water and went through three TVs in four years, not to mention all the microwaves, computers and cable boxes she also had to replace. And of course, there is the increased danger of damage to your home should a hurricane ever hit the island due to the water surge. It was a lot to think about, but if definitely kept the off-water properties in the running.

We finished off our afternoon with drinks back at Carambola. The banana daiquiris were to die for, and the happy hour special was actually a “special” – half price drinks. Carambola has a huge “Pirate” buffet on Friday night that is all-you-can-eat. I think H was really looking forward to it since he loves seafood, but the daiquiris had really upset my stomach. I watched him eat some quesadillas and we looked in on the people enjoying the buffet. The resort had a DJ and everyone was having a lot of fun dancing. Oh well, we’ll try it next time.