Here are a few photos from the March 19th parade in Christiansted.  Always a fun day. 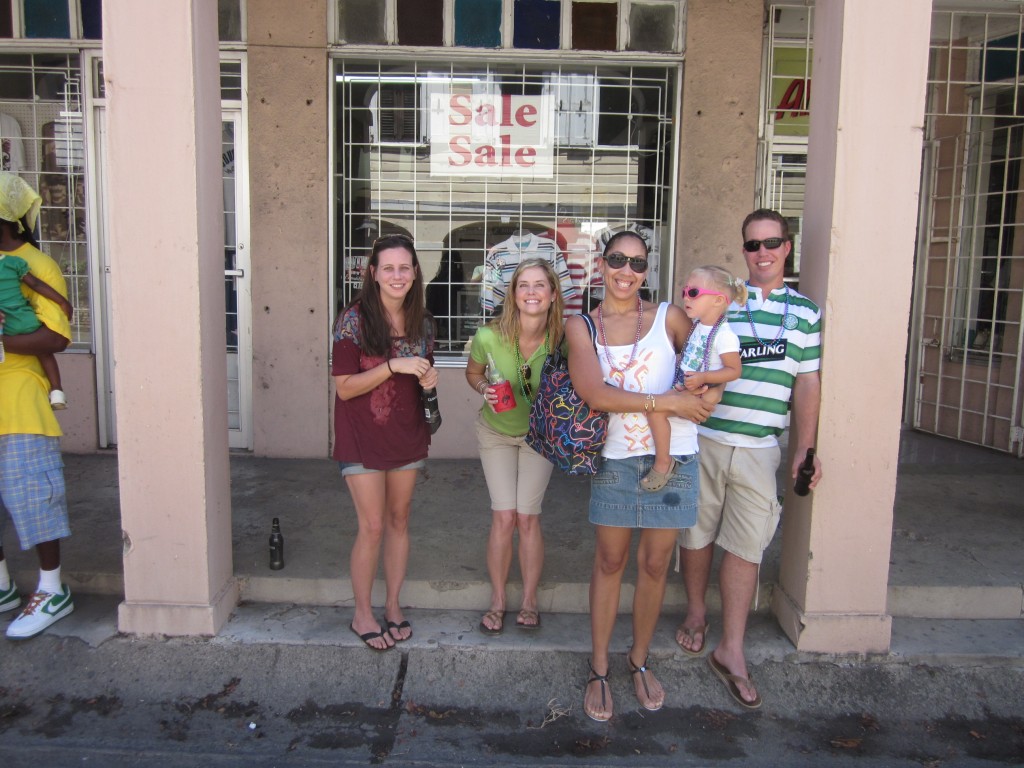 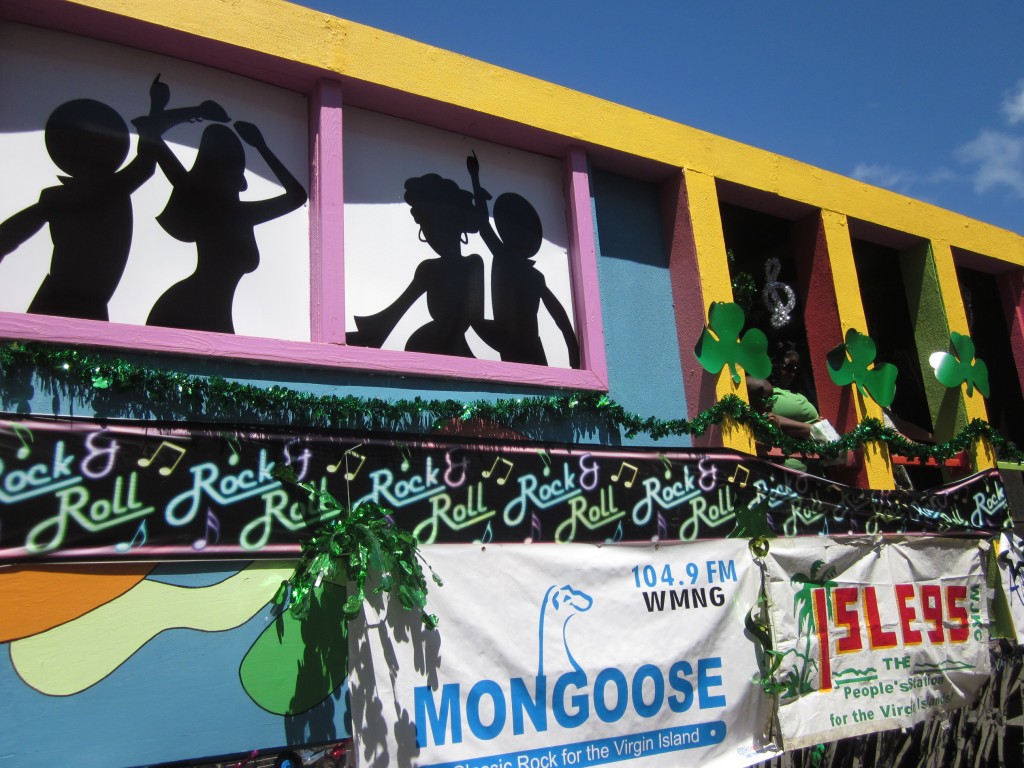 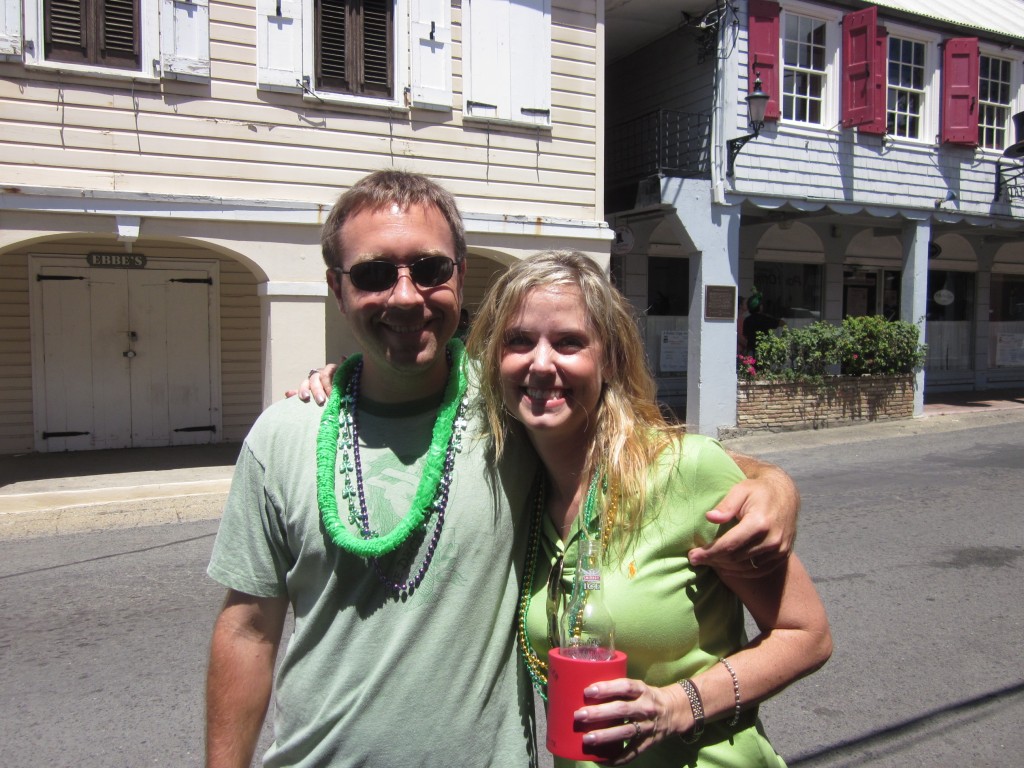 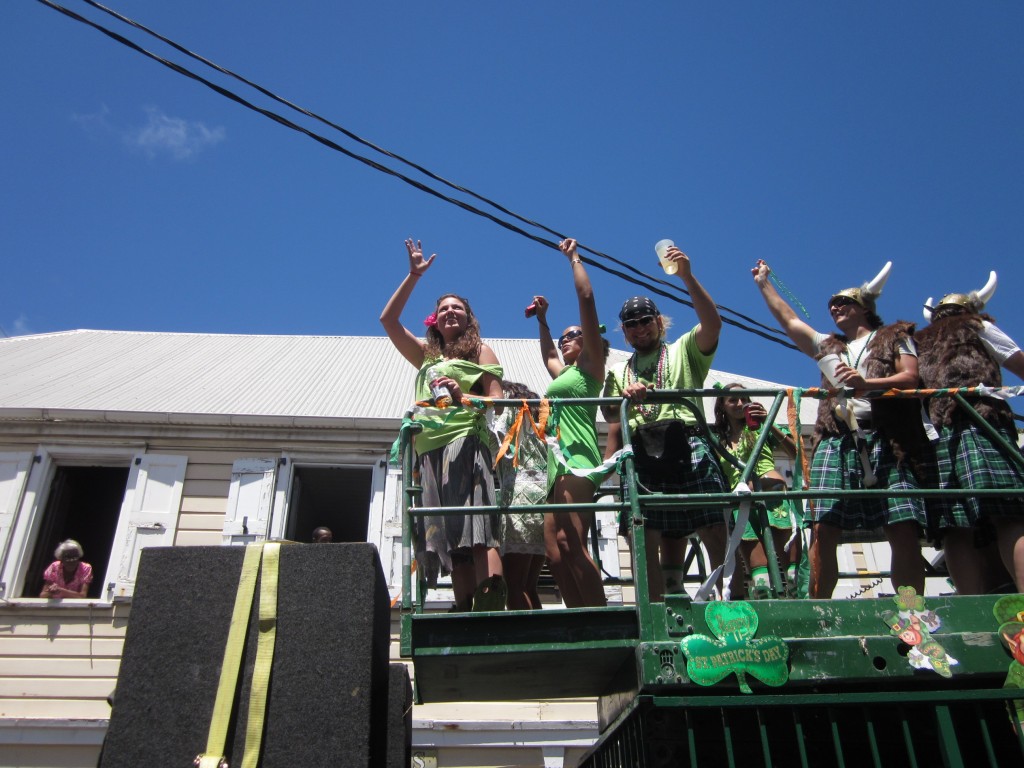 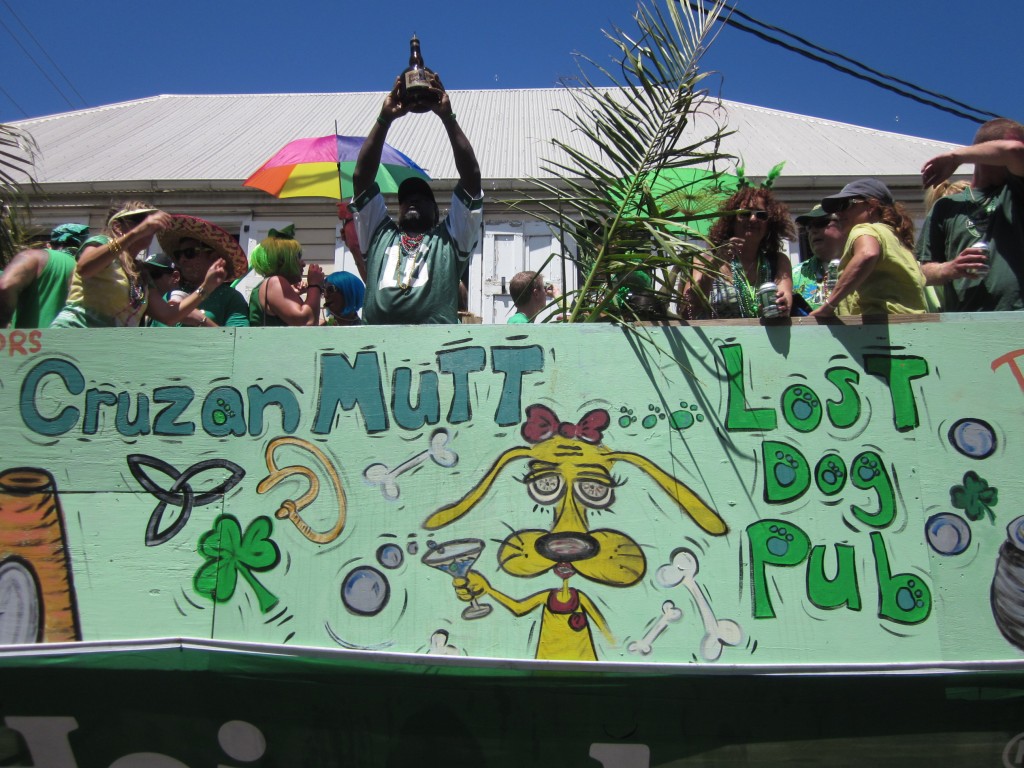 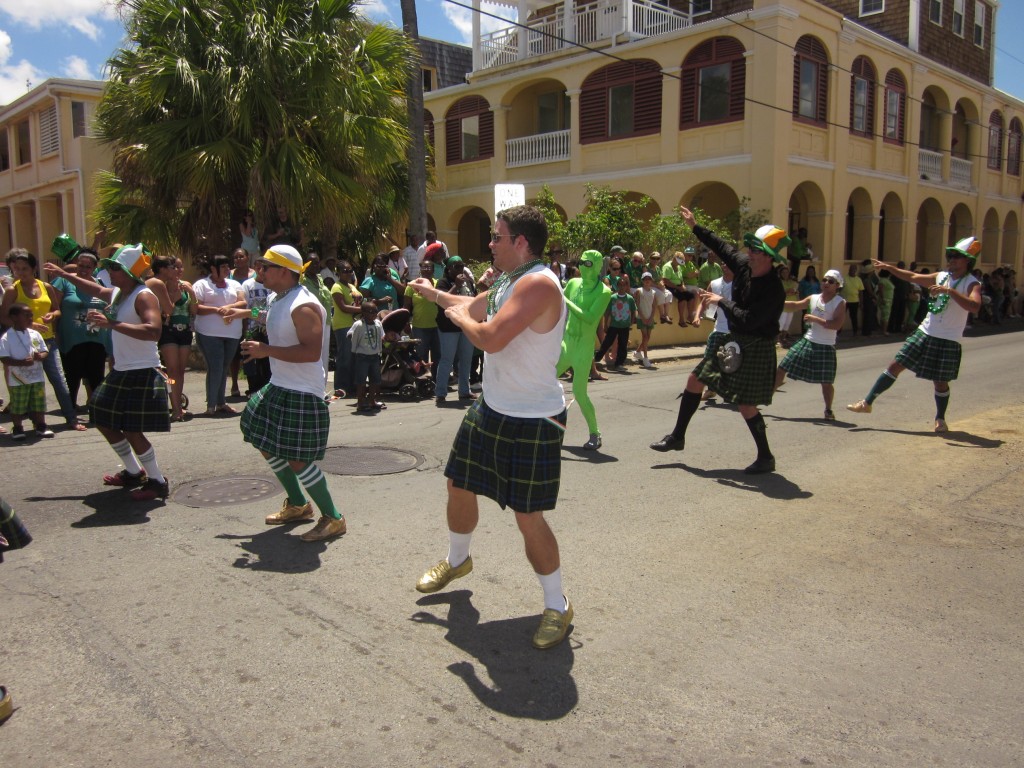 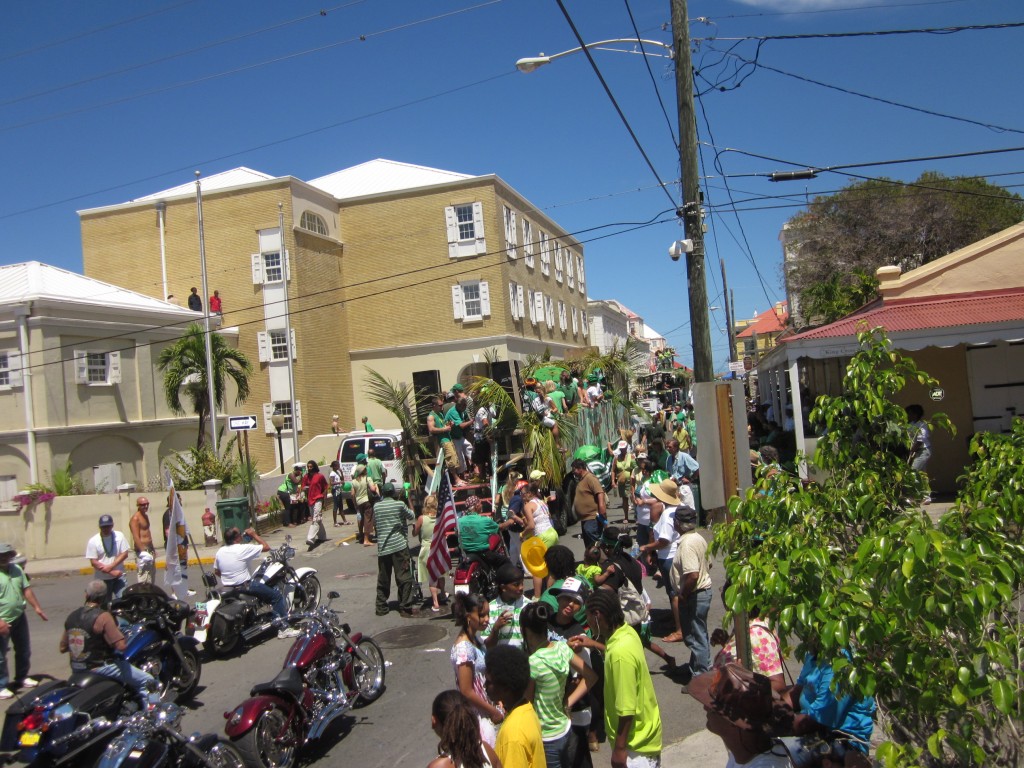 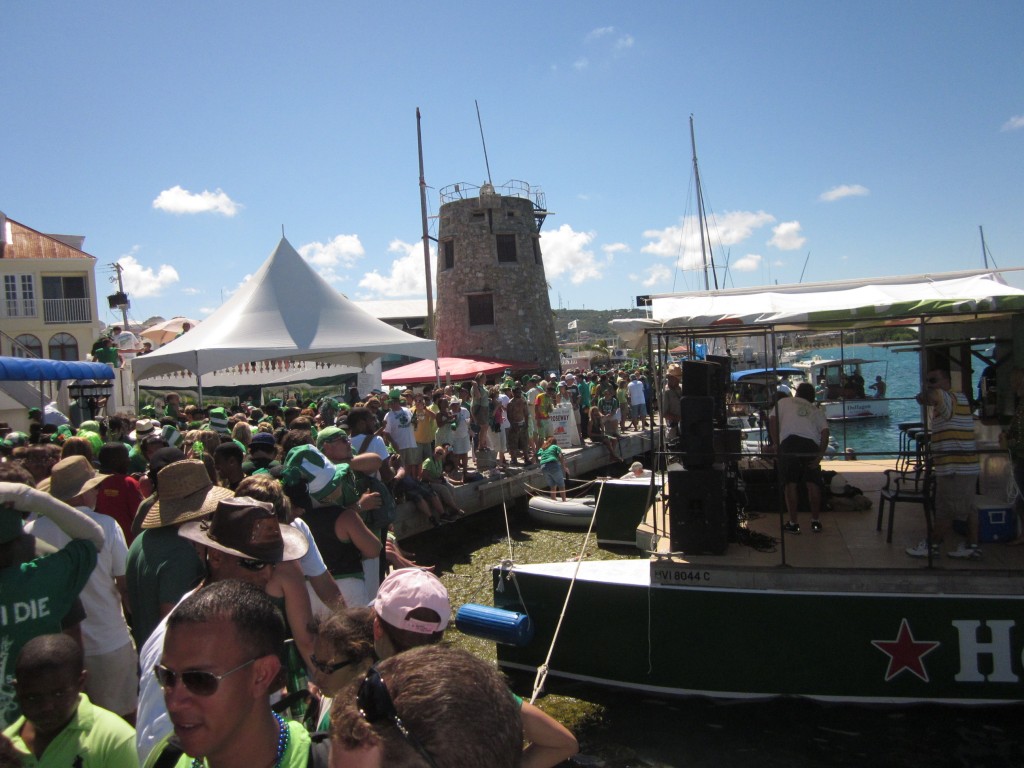 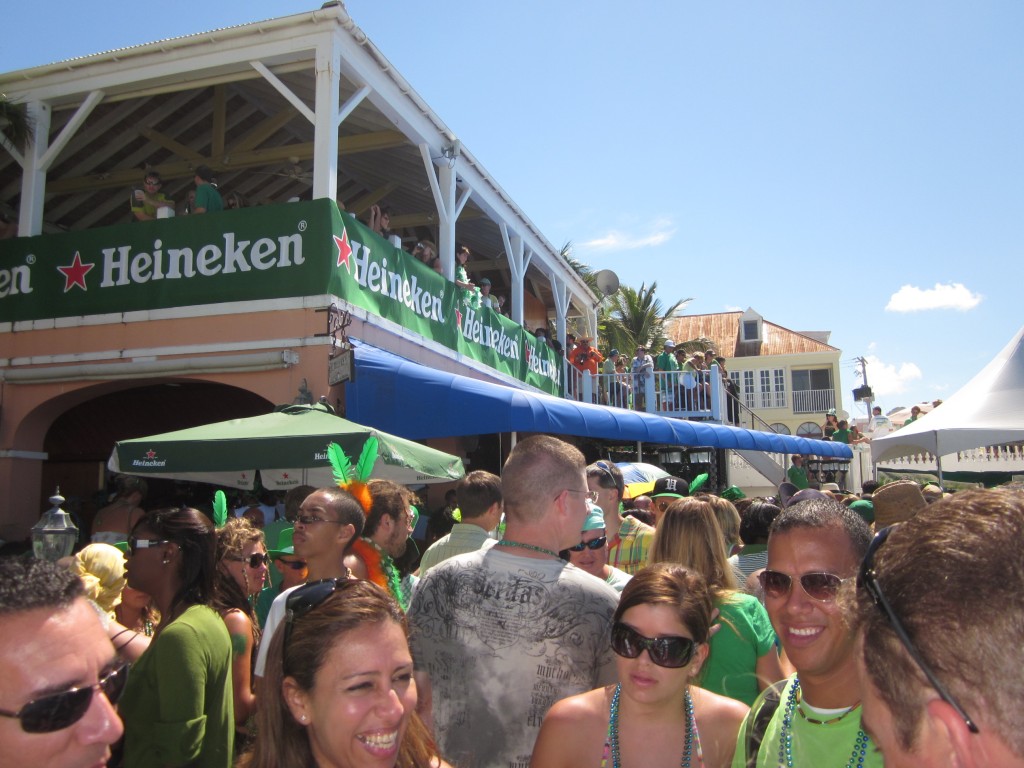 After checking out the Green Cay beach area with the dogs we decided to stop at the Brew Pub on the way back through town. Shortly after arriving a salvage boat showed up in front of us to rescue one of the 40+ boats that had been sunk during Hurricane Omar.  Here are a few of the photos:

If that is going too fast for you you can also check out the photos here:
http://picasaweb.google.com/chad.p.walter/IslandGirl?authkey=0adOEra0-I0#

On Saturday, we decided to spend the day getting a second look at some of the properties that we were most interested in buying from what we had seen Friday. But before we started that trip, I decided to give the roads of St. Croix a try with a morning run. I started out just by running around the Carambola Resort property, but soon realized that the property was not as large as it appeared. So I decided to venture off onto the North Shore Road. What better way to get a feel for living on the island than by running on the roads where I might be living and running all the time.

Running in Texas had not prepared me for running in St. Croix. The roads were much steeper than I was used to and it was very humid. Still, the backdrop of the ocean as far as the eye could see more than made up for my burning quads. There are no shoulders on this road (or many other roads on the island from what I saw) so I had to jump in the ditch a few times to avoid being hit by oncoming cars. They probably thought I was nuts running out there anyway.

I also ran along a trail that was cut through some brush at Davis Beach. We had looked at some properties there the day before, but because the road was not completed, we could not get a very good idea of what the lot was like or where the boundaries were. Running along the trail made me realize that these lots were probably too expensive for the building challenges that they presented. They seemed to be fairly steep and the beach appeared rocky from my vantage point, but with so much brush it was a little difficult to tell. I finished out the run back at Carambola. I decided not to tackle “The Beast” on this trip even though it was clearly marked and I ran past it. The Beast is one of several obstacles facing competitors of the St. Croix Half Ironman. It is a 600 foot climb with an average 14% grade and up to a maximum 18% grade. It was fairly difficult making it up the incline in our rented jeep. I couldn’t imagine the trip on foot.

After breakfast, we started out to explore the island and look at the vacant lots that we were most interested in a little closer. We took pictures and videos of some of the locations so we would be able to remember them after we got home.

We stopped in Christiansted for lunch at the Fort Christian Brew Pub where they actually brew their own beer. We ate outside on the dock and enjoyed watching the boats coming and going in the harbor.

We continued our drive around the island and attempted to drive out to Point Udall, the easternmost point of the United States. When we turned onto the road heading out to the point, we were stopped by the police. Apparently, the point was closed for a private event and were told we would have to come back the next day. We turned around and started down the Southshore Road. We had never been on the southeatern side of the island, and were a bit surprised at how undeveloped it was. Of course, the Divi Carina Casino is on the south side as is the Hovensa Oil Refinery; but otherwise, the south side is bare compared to the very populated north side.

Another reason for traveling this direction was to get back to the center of the island where the animal shelter is located. I had hauled down a pet carrier filled with lots of different pet items for an organization called Pets from Paradise. This is a great organization that is trying to do its part to correct the island’s pet population problem in a humane way. The shelter rescues animals and then transports them to sister shelters in the states where they have a better chance at being adopted. I was able to bring the carrier filled with treats, toys, bowls and other items needed by the shelter as checked baggage. Unfortunately, because of our return travel arrangements, we were unable to fly an animal home with us, but I hope to be able to do so on future trips.

We finished out the day by the pool and had dinner again at the resort. Of course, I had not learned my lesson from the day before and had two more banana coladas. As a result, I was only able to eat French fries for dinner. I really learned my lesson this time though.

We started out Sunday by diving with Cane Bay Dive Center. One reason we chose this dive center was that it was right across the street from the beach at Cane Bay and they offered beach dives. On our previous scuba diving trips, H got a little seasick so this dive was going to be a beach dive. I had gotten us seasickness patches which are supposed to be really effective in fighting seasickness, but H thought we should give the beach dive a shot since it was so convenient.

The beach dive was probably not a very good idea for me though. It took me so long to swim out to the reef because we were swimming against the waves that I was exhausted before we ever went underwater. (I’m sure my hilly run the previous day didn’t help either.) The reef was incredible though. Cane Bay is on a “wall” that runs along the north shore. It drops off to 3200 feet so there is a lot to see. I saw an eel which I had never seen before. It looked very menacing, but it didn’t pay any attention to me. We also met a very friendly sea turtle. The divemaster that we dove with tickled its fin, and it seemed so happy. It didn’t even try to swim away.

The dive was beautiful and it just reinforced our decision to move here. We would be able to dive or snorkel any time we wanted to, especially if we decided to live on the north shore. Getting out of the water was not very easy for me. During the dive, I had become buoyant as I used up my air. The divemaster had given me extra weight during the dive so getting out of the water was a major chore. I not only had all the heavy equipment strapped onto my back but I also had an additional 18 pounds of weight. When a big wave washed onto the shore, I was knocked completely over. Not very graceful, but it was a fun and exciting dive nonetheless.

We decided to have lunch in Frederiksted that day. On our previous trip to St. Croix, we just made a quick drive through the town. I wanted to see it from a closer vantage point and at a slower pace. Of course, I forgot that we also learned on our last trip that nothing is open on St. Croix on Sunday. The town was shut up like they were expecting a storm. At least some of the restaurants weren’t closed. We ate at The Sunset Grill which is just north of town. It was on a beautiful beach at Sprat Hole. We had heard that the beaches on the west end were amazing sandy beaches and we were not disappointed. We enjoyed the food, and the atmosphere was very laidback with two guys playing reggae/jazz music.

We finished up the day again at the resort by the pool. H laid in the hammock on the beach. I only had one drink that day so I was able to actually eat dinner that night. I had a really flavorful pasta dish, but as is classic island service, it took probably thirty to forty-five minutes to receive our meal.

On Monday, our last day, we checked out of the resort after breakfast and drove into town. We walked around Christiansted for a little while just to see what the city was like on a regular workday. It was fairly busy, and we had a little difficulty finding a place to park, but not overwhelming like a metropolitan area.

We had lunch at Luncheria. If I was going to live on this island, I had to know that I would not have to give up Mexican food, my favorite type of food. Luncheria is a restaurant that you would never find if you did not know that it existed. It was down a little side street and then tucked away in a little garden area. The ambience was very relaxing, but the fact that little chickens were running around influenced my menu selection. The food was very cheap – something we had not found anywhere on the island. Of course, in exchange for a lower price, you gave up some of the nicer things like silverware and real plates. The food was really great though and it would serve to satisfy my weekly cravings for Mexican food.

We finished up our trip armed with a lot of information and pictures of our future home. We were determined to make the move – now, how to pay for it.